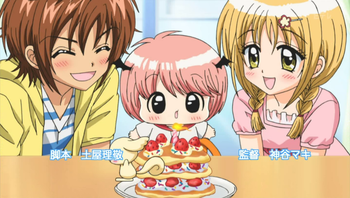 Chibi☆Devi! is a Shōjo manga by Hiromu Shinozuka. The story centers around Honoka Sawada, a teenage girl with a miserable life. She lost her parents at a young age, her aunt is never home, and the other girls at school bully her. She can't even visit her only friend Kyou because his friend Shin scares her. But her life changes when two demons decide to send their baby to her home. Now she must take care of the demon baby with the help of Shin and the staff of a bizarre daycare center.

The manga began serialization in 2008 in Ciao, and completed its 6-year run with 11 volumes. A side story, Chibi☆Devi! Minna ga Eran da! Chou Ninki Best Collection, was compiled in 2014. A 5-minute anime series produced by Synergy SP ran from 2011 to 2014, and ended with 75 episodes.

Mao-chan has a bad day.

Example of:
Not My Lucky Day

Mao-chan has a bad day.