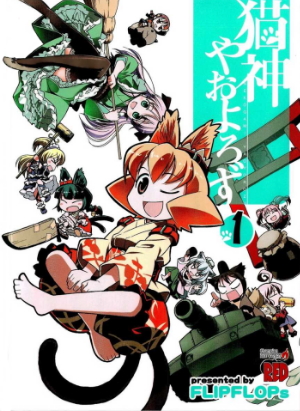 Mayu is a mischievous cat god who's caused problems one too many times, and, as punishment, is stripped of her powers and banished to Earth. There she's taken in by Yuzu Komiya, the owner of the Yaoyorozudou antique shop. There are other gods in the town beside Mayu, many of whom are familiar with her, and many more she'll get to know. So begins a self-described "neighborhood deity comedy" about Gods among men and the hijinks that ensue.

Originally a manga by FLIPFLOPs which was serialized from 2007 to 2012 in Champion Red Ichigo, Cat God (Japanese name Nekogami Yaoyorozu) was adapted into an anime in the Summer 2011 Anime season by AIC PLUS+.