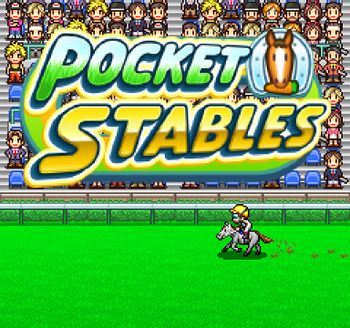 Make no mistake- It's Nintendo Hard
Pocket Stables is a horse-racing and ranch-building sim game from Kairosoft, released in November 2013 for iOS and Android, the latter onto both Google Play and Amazon App Store. In this game, you have just acquired a ranch and you must now acquire horses for racing, the ultimate goal being to win the triple-crown derby. The sim part of the game comes into play with the fact that you must build out your ranch with training facilities, lodging for your jockeys and horses, and even attractions to earn money from visitors. And then there's research. Win races and build out certain attractions to earn medals, which can be put towards unlocking courses, new breeds of horses and researching and upgrading abilities. All this while balancing on a very tight budget.The game contains the following tropes:
Advertisement: