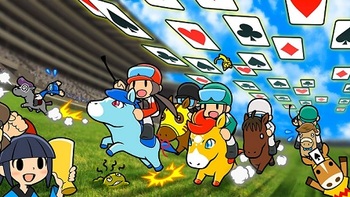 Horse-riding solitare action.
Pocket Card Jockey is a... rather unusual video game developed by Game Freak of Pokémon fame. It was first released in Japan for the Nintendo 3DS and mobile devices in 2014, where it is known as Soliti Horse, and was published by Game Freaknote It was notably the first game to be published independently by Game Freak. It was later internationally released exclusively for the Nintendo 3DS in 2016, known as Pocket Card Jockey overseas, published by Nintendo.
Advertisement:

In this game, you are placed into the shoes of the protagonist, a rookie jockey who knows squat about riding or training horses. However, he/she aspires to win the Derby, the horse races to end all horse races. The protagonist approaches a stable owner named Mr. Maekawa, who entrusts the protagonist with a horse. However, as they don't know how to handle a horse, they are bucked off, kicked in the gut, then run over by a pack of horses. Thankfully, they are revived from near-death by an angel who looks suspiciously like Mr. Maekawa, who forces them to promise to win the Derby, or else the player will never win a video game again. To fix the protagonist's problem with horses, the angel enables them to ride a horse by... playing solitaire. It's that kind of game.

) played between racing segments. Performing well at solitaire results in better racing, while performing poorly results in low Energy and a very mad horse. At the end, your efforts will be converted into Enthusiasm to charge down the Homestretch. Players will grow their horse through races, and once the horse matures, they may continue racing with it or retire it, after which they may breed horses and start again.