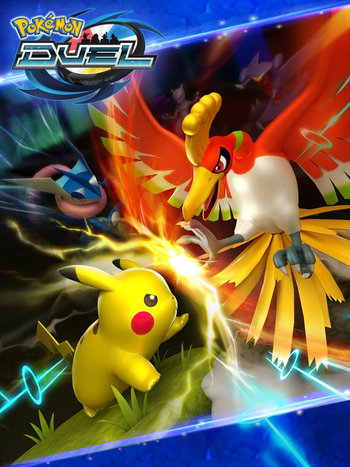 Pokémon Duel (known as Pokémon Comaster in Japan) was a free-to-start Pokémon game for mobile devices developed by HEROZ. It was released in Japan for Android devices on April 12, 2016 and for iOS on April 19, 2016, and in North America, Europe, and Australia on January 24, 2017. The game was shut down on October 31, 2019.
Advertisement:

The game was a strategy board game based on the Pokémon Trading Figure Game where players battle with figures and attempt to reach the opposing player's goal. Each figure has its own attacks and abilities; attacks are determined by spinning a wheel. In order to give the game the world's strongest AI, The Pokémon Company has partnered with HEROZ, whose app Shogi Wars is known for being able to defeat and challenge professional players.