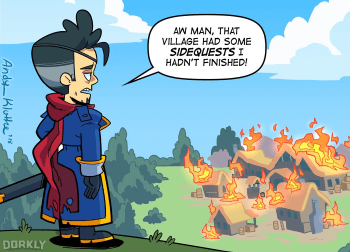 "Oh yeah, there were people living there too, I guess."
"When you're exploring a video game world, you don't like being told which areas you can and can't go to. So you're really not gonna enjoy it when you try to go to an area you've already been to, and then you're told 'you can't come in anymore 'cause you're wearing trainers.' WHAT IF I LEFT SOMETHING IMPORTANT IN THERE?! WHAT DO I DO NOW?!"
— Rabbid Luigi
Advertisement:

Permanently Missable Content is a gameplay component (such as an item, weapon, Side Quest, character, achievement, or plot event) that can become permanently inaccessible after a certain point. A close relative and often an example of Guide Dang It! A common source of frustration for gamers, especially those shooting for 100% Completion. If a player's window for accessing the content has closed, their only options for getting it are to either reload an earlier save (if possible) or start the game anew.

These components frequently appear in areas that can only be accessed once, or are rendered unavailable after a certain plot event occurs. The early town that is destroyed, the mountainous area that caves in once you leave, the area that your characters are restricted from accessing after a certain point for plot reasons, the Load-Bearing Boss's hideout that explodes after you defeat them, the ship that departs after your trip is finished and never returns, and so forth. These components may also become missable for a random or arbitrary reason (such as an NPC related to the component suddenly disappearing after a certain point in a game).

Because of their tendency to induce great frustration, smart developers tend to avoid implementing these, and allow the player to collect items or do sidequests at their own leisure. However, allowing the player to backtrack to any previously visited location can be difficult to reconcile with the game's narrative. One increasingly common way around this is for the game to provide a shop or other special location that makes available all of the unique items the player missed throughout the game as an Anti-Frustration Feature.

If the content (or even the entire game) is truly permanently missable because it is/was released online for a limited time before being taken down, that's Temporary Online Content or Defunct Online Video Games.