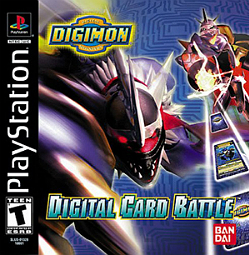 Digimon: Digital Card Battle, originally released in Japan as Digimon World: Digital Card Arena (Japanese: デジモンワールド デジタルカードアリーナ, Hepburn: Dejimonwārudo Dejitaru Kādo Arīna) is the second Digimon Card Battle Game penned by the same creators of the original Digimon World. (The first game was never exported.) It was developed by BEC and published by Bandai, and was first made available in Japan in December 2000, with English releases in North America and Europe arriving in June 2001 and July 2002, respectively.

Though similar to the Digital Monster Card Game / Hyper Colosseum TCG at the time (with the international version even including a promotional card for Digi-Battle Card Game), it is actually a different, much simpler card battler. In fact, it has become a Cult Classic among the Digimon fandom.