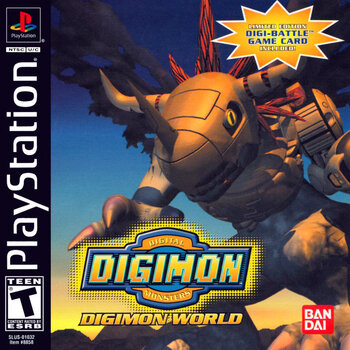 Digimon World is a Digimon video game for the Playstation. Released by Bandai in 1999, as a result it is based more on the Digimon Virtual Pets rather than the better-known anime series.
Advertisement:

The main character is pulled through his V Pet device into the Digital World and is then tasked by Jijimon to rescue File Island from the corruption they have encountered. The majority of the Digimon have become wild and the only city has fallen into disarray.

The majority of the game revolves around the player raising their Digimon, much like the Virtual Pets. The Digimon the player raises must fight wild Digimon in order to try and return them to the city.

It was followed by a variety of different sequels, as well as a card battle spin-off. Digimon World Re:Digitize and Digimon World -next 0rder- are direct sequels to this game, following the original gameplay much more closely.