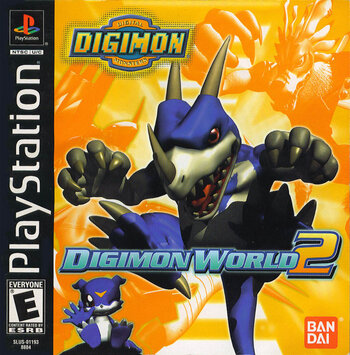 It's as awesome as it looks
Advertisement:

Digimon World 2, like its predecessor, was an RPG for the PlayStation. However, while the first game was a Mon-raising sim with RPG Elements (and Digimon World 3 and the DS games would be a more typical Eastern RPG), Digimon World 2 tried its hand at the Roguelike formula.

Our hero Akira has just gotten his Tamer License and the keys to his brand new Digi-Beetle. After joining one of the three teams that guard Digital City — the Vaccine-using Gold Hawks, the Data-preferring Blue Falcons, or the Virus-loving Black Sword — he gets his first Digimon and sets out to start protecting his home, patrolling various domains, battling or befriending wild Digimon, and participating in the various tournaments in his free time. Of course, it doesn't take long for things to get a lot more complicated than that...

The Digi-Beetle serves as your lifeline in the dungeons; it has its own HP, EP, and various tools and weapons you can install to make exploring easier. Defeat Means Friendship is also given an odd twist; Digimon are shown wandering the map, and you can shoot gifts at them to drastically raise the chances of them joining you, then kill beat them last.

Another strange quirk of the game is that digimon all have level caps (which they reach rather soon), meaning you have to repeatedly digivolve, de-digivolve, and combine them in order to build a decent team (have in mind that combining them resets the Digimon level to 1).