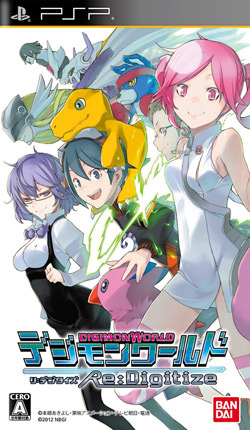 Digimon World Re:Digitize is a 2012 re-envisioning of Digimon on the PlayStation Portable that was released on July 2012, and is a sequel to the original Digimon World. In the game, “Digimon” is a popular online game where you raise monsters and battle them. The main character is a fan of the game. One day, he logs into the game as usual when he gets an unusual email with some code in it. After decrypting it, he’s sucked into the Digital World, where Digimon are real. He, with his partner, explores the Digital World, trying to find out why he was sucked in in the first place. Digimon can die, they poop, and evolve.
Advertisement:

It received an Updated Re-release for the 3DS in June 2013 under the title Digimon World Re:Digitize Decode. This version added new story content and more than doubled the raisable Digimon. It received a Fan Translation in late 2020.