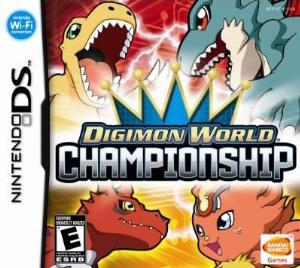 Digimon World Championship isn't a RPG. This game is actually an attempt to focus on the monster raising aspects of the franchise, and presenting them through online play. Like in the first Digimon World, the monsters battle by themselves and can go against several opponents (5) at once, but this time its in a 2D environment and the gameplay itself is simplified
Advertisement:

Even though the focus is on capture and training, it is still notable that this game has no story to speak of. At best, it gives you one objective: Complete the trophies. The graphics as well as the sound are sufficient, even though once again the scenery isn't inspiring (then again, all that we see is the ground...)

The gameplay has mainly three aspects: Capturing the Digimon, which is done by drawing lines around the Digimon (like in the Pokémon Ranger games), raising the Digimon, training it to increase its stats as well as acquiring strong techniques (which also influences it's evolution), setting up for battle, by adjusting the Digimon to the rules that are set. After that, the battle is purely automated, and progress is made by winning several tournaments.

Below, the tropes that apply to it: