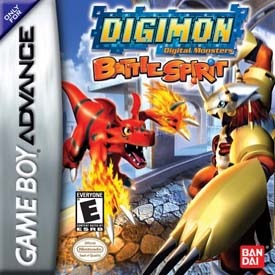 Digimon Battle Spirit is a series of 2D fighting games based on the Digimon franchise, developed by Dimps. Unlike its "sister series" Digimon Rumble Arena, it provides a somewhat unique spin on the fighting game genre - instead of knocking out the opponent, the goal is to collect the orbs dropped by the opponent when they are damaged; the winner is the one who has collected the most spheres. In Japan, all installments were exclusive to Bandai's WonderSwan console; considering that the WonderSwan never existed in the west, the translated games were instead ported to the Game Boy Advance.
Advertisement:

Digimon Battle Spirit 2 (Digimon Frontier: Battle Spirit in Japan) was exclusively focused on Digimon Frontier, and as such had a much smaller playable cast. It follows the anime to a certain extent, being that the final boss is the anime's Disc-One Final Boss... but that's where the adherence ends. This time, evolving is achieved by filling a meter at the top of the screen by damaging the opponent; once it's full and activated, the player briefly evolves to the respective Beast Spirit form and uses that attack instead.