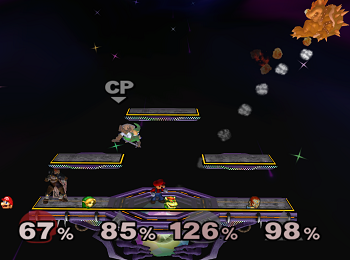 "Platform Fighters are an experience I don't get from any other Video Game. It combines strategy, mind games, mixups from a fighting game with the freedom, creativity, and style of a platform game into an experience unlike anything else."
—Bowler

Platform Fighter is a Sub Genre of Fighting Game best exemplified by the Super Smash Bros. series. Unlike traditional fighting games, platformer fighters provide a wider array of maneuverability options and feature mechanically dynamic stages. Since the subgenre originated on home consoles instead of arcades, platform fighters generally have the distinction of controls that are designed for typical video game controllers, rather than the fight sticks used to reproduce the arcade-style experience.

The genre's name was coined by Super Smash Bros. players to properly describe the mechanics of the series, which is the Trope Codifier. Because these games play so differently from traditional fighters, the fighting game community was plagued for years with people questioning whether Smash (and, by extension, other platform fighters) even qualified as "true" fighting games. As far as Smash creator Masahiro Sakurai is concerned, he originally envisioned the series as more of a casual party game (hence all the randomly-spawning items), but now views it as a mix of both genres, with entries following Brawl having more options and modes to better accommodate more serious play.

Speaking of which, though several of these games are known to have party elements, Smash's Tournament Play (no items, timed stock mode, et cetera.) and the emergence of games such as Rivals of Aether have begun to redefine the sub-genre with more hardcore, competitively-viable elements.

As an aside, because Super Smash Bros. is the most well-known of these titles, with many licensed fighting games for other mascot characters following suit, this wiki used to refer to all games of this type (or those with non-traditional mechanics in general) as the Mascot Fighter. To be clear, a mascot fighter doesn't have to also be a platform fighter or feature non-traditional mechanics, and a platform fighter doesn't have to feature mascots or be a Massive Multiplayer Crossover.

Subtrope of Free Floor Fighting. In single-player mode, these games can resemble an Elimination Platformer.