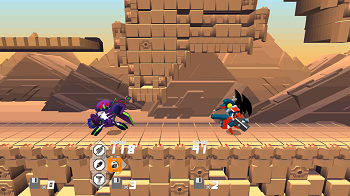 Megabyte...PAUNCH!
"Kicking a robot so hard that it tears through the air at high speed and crashes into the wall, destroying parts of it in the process. Beautiful."
— Chris Priestman, IndieStatik

Summoned by the Heartcore of Ventu village, it is your duty to defend your home and fellow Megacs against other forces that wish to seize the power of the Heartcore for their own ends. As a token of good will, the neighboring Valk Empire offers a gift to the youngest megac in the village, you. However, the Empire's representative quickly goes rogue upon your arrival, and attempts to hold you hostage...

. Gameplay combines the part customization and collection of Custom Robo, with the fighting and control style of Super Smash Bros., delivered with bright, chunky aesthetics. You can explore 6 unique areas, demolishing rogue Megacs for their parts, or engage in a variety of 1-1 fights, where the objective is to knock the opponent off the side of the stage and off-screen for a kill. It also features 4-player split-screen co-op and versus mode. It'll receive a Nintendo Switch version via the Nintendo eShop on May 8, 2020. The Switch version will include two exclusive bonus stages and amiibo support functionality to unlock exclusive colors.

, with a demo available at Kongregate