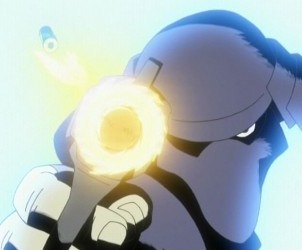 Samurai Gun is a manga series by Kazuhiro Kumagai, that was serialized in Weekly Young Jump magazine from 1996 to 2002. It was adapted into a 13-episode anime, which was directed by Hideki Sonoda and aired in 2004.

The Samurai Gun are highly-trained and conditioned, pistol-packing rebel samurai (though their modus operandi is more that of ninjas) who seek to avenge the misdeeds of the ruling Shogunate. They take their orders from a mysterious 'Council' whose actions and motives are questionable at best. The protagonist Ichimatsu suspects the Council was involved in the brutal death of his family when he was a child, and hopes to discover the truth through his activities as a Samurai Gun.

No relation to the video game Samurai Gunn.