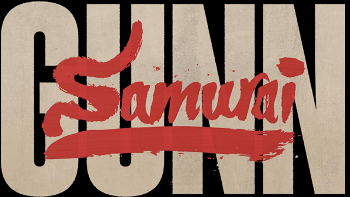 Samurai Gunn (sic) is a 2D local multiplayer-oriented fighting game developed by Teknopants and Maxistentialism, based around the idea of One Hit Kills in a similar vein to Divekick. Unlike Divekick, however, the focus is on jumping throughout the level, aiming to get one sword slash in at your opponent, or perhaps one of three bullets from your trusty gun...which can in turn be deflected back at you with a single sword slash.
Advertisement:

Feel overwhelmed yet? It gets better with four players...

The game was released in December 2013 on the developer's website

Not to be confused with the anime/manga Samurai Gun.