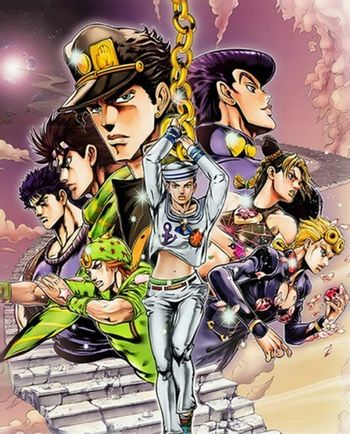 OPEN THE GAME
"This is a story of those who stand up against 'reality'."

JoJo's Bizarre Adventure: Eyes of Heaven is a fighting game developed by CyberConnect2 (of Asura's Wrath, .hack, and Naruto Ultimate Ninja fame) and published by Bandai Namco Entertainment. The game is a successor to 2013's JoJo's Bizarre Adventure: All Star Battle, and the second JoJo's Bizarre Adventure game by the developer. Unlike its predecessor, which was a 2.5D fighter in the vein of Street Fighter IV, Eyes of Heaven treads a more familiar ground to CC2 games, being a 3D fighter akin to CC2's own Ultimate Ninja Storm series, featuring larger and more interactive environments. This game also features a tag-team system, which allows you to team up any two characters and have them on the battlefield at once, and also allows you to do Combination Attacks. The game was announced in the January 15, 2015, issue of Famitsu and was presented at Jump Festa 2015.

Returning characters from All Star Battle have their models and animations reused from that game, with reworked textures to match their anime designs. Like in All-Star Battle characters are categorized by fighting styles, which currently includes Hamon, Ogre Street Techniques, Vampiric, German Science, Mode, Stand and Mounted. The game allows for online play through the PlayStation Network system.