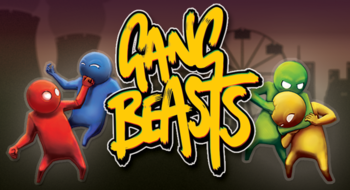 Developed by British indie studio Boneloaf and published by Double Fine, Gang Beasts is a unique physics-based multiplayer fighting/party game. Players take control of gelatinous, colour-coded avatars and have to throw each other off of a variety of precarious arenas, ranging from a simple wrestling ring to a pair of moving trucks.

Surprisingly, the game has some All in the Manual Excuse Plot lore. Supposedly, all the characters live in the fictional metropolis of Beef City, which has an economy entirely based on meat-packing. An economic recession leads to mass layoffs and, in turn, violent gang brawls break out in the beaches, in the fields and in the streets.