The Man They Couldn't Hang 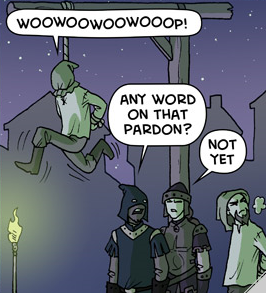 A character who has survived a hanging. They will frequently sport a scarred or deformed neck as a result. This may just indicate that he is a real hard case and too tough to kill easily, or it may be used to show what a bad life he has led and to explain his hatred of the world. A Bungled Suicide may also be involved.

If he survived three attempts, a sporting (or superstitious) executioner may have let him go. Probably because it's best to keep on the good side of a badass like that.

Shoot the Rope may be used to explain their survival.