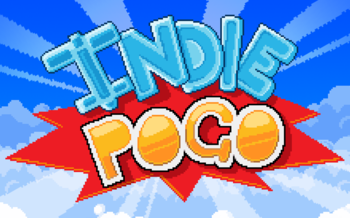 The pogo stick in the "I" should give you an idea of what's in store.
Advertisement:

Created by the Lowe Bros., Indie Pogo is a Massive Multiplayer Crossover Platform Fighter in the same vein as Super Smash Bros. and starring characters and locations from various Indie Games and their respective companies.

But while Smash Bros. mostly takes place on the arena floor, Indie Pogo takes a page out of Divekick's playbook and simplifies things by taking it into the air.

All of the characters jump automatically, and your objective is to either knock your opponent out of the stage like Smash Bros. or to reduce their HP until they shatter and respawn. All attacks are done using one button and a directional input. Not all stages have points you can knock off your enemy, however, and some are enclosed so your only method of victory is to knock their HP down.

It was successfully funded on Kickstarter

A massive update known as the Heavy Metal Update was released on May 7th, 2019, which added Bullet Kin and Diogenes, melee attacks, grabs, side specials, many balance changes, and a new mode known as Crown Pogo.