Video Game / The Next Penelope 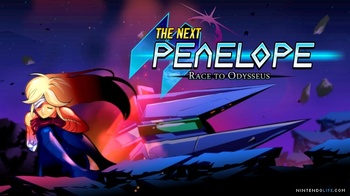 Once in Ancient Greece, the queen Penelope was famed for her undying loyalty despite the advances of many persistent suitors. One day the King Odysseus, her husband, shows up missing and she decides to take to a spaceship and move across the galaxy in search of a new husband.

The player takes the role of Penelope as she moves to different galaxies to find a new husband—by racing different characters! Each galaxy in the game consists of a three-level challenge by simply introducing a new mechanic, participating in a race, and then racing the world's boss.

This Vehicular Combat Racing Game first spent some time in Steam Early Access, and was officially released for PC on May 29th, 2015. It later received an Updated Re-release The Next Penelope: Race to Odysseus, and was ported to Nintendo Switch on December 21st, 2017.