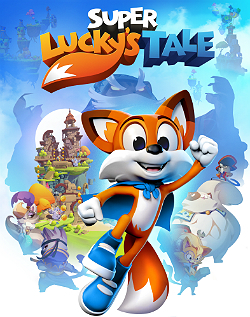 Super Lucky's Tale is a 3D Collect-a-Thon Platformer that hearkens to the 1990s, and the mascot platformers of the time. It was developed by Playful Corp. and released for Xbox One and Microsoft Windows PCs on November 17, 2017. An Updated Re-release for the Nintendo Switch, New Super Lucky's Tale was launched on November 8th, 2019; this in turn was also released for other consoles (and, on a more surprising note, Steam and the Epic Games Store, being confirmed only on the day of its release) on August 21, 2020.
Advertisement:

In a far away world there lives a fox named Lucky and his sister, Lyra, who are the protectors, or "Guardian Order", of the Book of Ages, inside of which exist large worlds with diverse characters. There also lives a sorcerer cat named Jinx, who, alongside his offspring, the Kitty Litter, have the notion of stealing the book for their own nefarious purposes. In a quest to find his inner power, Lucky proceeds into the book to find the many treasures within its pages- the keys to stopping Jinx in his tracks- while also meeting a diverse variety of characters, including the Kitty Litter.

The plot is slightly adjusted in New Super Lucky's Tale, in which Jinx decided to betray his friends to obtain the Book of Ages, banishing those who opposed him into far worlds. He eventually cornered the remaining Guardians in a game of "Cat and Fox" (as Jinx quotes), only for it scatter its pages across these worlds, suck up Jinx, the Kitty Litter, and Lucky elsewhere. It's up to Lucky to find the pages and stop Jinx's plans for good!