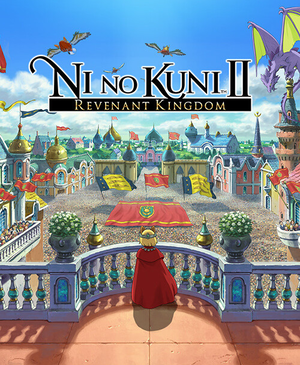 The sequel to Ni no Kuni, developed by Level-5 and published by Bandai Namco. Set hundreds of years after the first game, Evan Pettiwhisker Tildrum, newly crowned king as his father had just recently died, was usurped from his castle by the mouse tribe. Meanwhile, in the other world, Roland Crane, President of a United States-like country, was on the way to an emergency summit when nuclear bombs hit. Roland, caught in ground zero of the blast, almost dies, but is suddenly transported into Evan's room at the height of said mouse tribe's coup. Escaping the castle together, they set off on a journey to build a kingdom where everyone can live happily ever after.

The sequel retains the Studio Ghibli style artwork from the first game, as a good deal of former Ghibli artists are now part of Level-5. However, the combat changed from a Mon-like action/menu-based system to more traditional Action RPG, with familiars replaced by Higgledies who run around the battlefield and provide support.

The game was released for Windows and PS4 on March 23, 2018. It received a free DLC, titled The Adventure Pack, on October 24th, 2018, which introduced a new sidequest chain and two new trophies/achievements. A paid DLC, The Lair of the Lost Lord followed suit on 13 December 2018, dropping four new sidequests (two initially available, two more unlocks as you delve deeper into the new dungeon) and several new spells and skills as well as expanding the existing research tree. It also increases the maximum level cap to 120, and drops five new trophies/achievements. A second DLC, The Tale of A Timeless Tome was released on March 19th, 2019, which bring with it another 5 new trophies/achievements, more new skills, a new string of sidequests, a new building for Evermore, and increases your level cap to 150. However, this is speculated to be the last of the DLCs for the game, as the DLCs did not really sell well and received mixed reviews.

An Updated Re-release, titled Prince's Edition, of the game for Nintendo Switch was announced in May 2021 for release on September 17 of that year. It will bundle all previously released DLC.