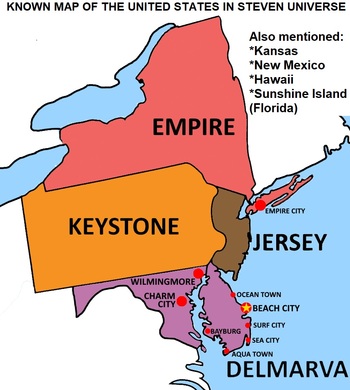 Sunshine Island sounds like a nice place to live.* "Sunshine Island" is actually a fan name for lack of a better term when the map was created; the canon name is "Florida Island". "Kansas" is referring to the city and not the state.
Greg: I gotta drive over to the next state, Keystone.
Pearl: You mean the Keystone State?
Greg: Right, the state named Keystone.
— Steven Universe, "Keystone Motel"
Advertisement:

Speculative Fiction trope wherein the United States of America is significantly different from real life. Perhaps it has broken up or expanded beyond its borders, is replaced by a completely different entity, or become a dictatorship. Whatever the case, we ain't in Kansas no more. Or at least, Kansas as we know it.

If it involves changing what is already history to us, then it overlaps with Alternate History. Otherwise, it's probably a story set 20 Minutes into the Future.

Please only list examples here that don't fit into any of the Sub Tropes above.