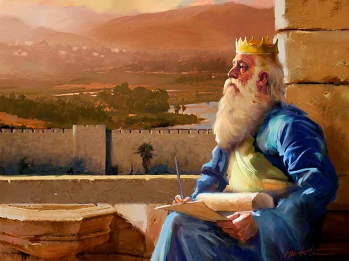 "I found Aquilonia in the grip of a pig like you — one who traced his genealogy for a thousand years. The land was torn with the wars of the barons, and the people cried out under oppression and taxation. Today no Aquilonian noble dares maltreat the humblest of my subjects, and the taxes of the people are lighter than anywhere else in the world."
— Conan, The Scarlet Citadel
Advertisement:

The Good King is honorable, virtuous, wise, and understanding. He treats his subjects with respect (no matter how seemingly unimportant they are), governs the land fairly, is a Royal Who Actually Does Something, and feels no need to flaunt his considerable power. The Good King also tends to be soft-spoken, but when he raises his voice, you’d better listen. You might mistake his kindness for weakness, but you would do well to remember that good does not always equal soft.

If the work takes place during a war, expect this king to be on the front lines and always putting The Men First. When it comes to the actual battle, the Good King tends to lead the charge and is often more formidable in combat than any of his soldiers.

Above all else, a Good King cares about his kingdom and his people and will sacrifice himself to protect them, even if that means putting Honor Before Reason.

Any work where the king has been killed by an Evil Prince, The Caligula, Evil Uncle, or Evil Chancellor will normally portray the deceased king as this, to serve as a contrast to the current evil regime. After The Good King dies, he will almost inevitably be followed by a Sketchy Successor.

Because kings are typically associated with old men, the Good King will rarely be the main character and often serve as The Mentor to the protagonist. If the protagonist is one of his children, expect him to have Papa Wolf tendencies.

May be Happily Married to The High Queen, thus forming a Ruling Couple. When a Prince Charming or Wise Prince grows up, he tends to become the Good King.

In terms of the ranks of Authority Tropes, the tropes that are equal are The High Queen, God Save Us from the Queen!, The Woman Wearing the Queenly Mask, She Is the King, Iron Lady, and President Evil. The next steps down are The Evil Prince, Prince Charming, Prince Charmless, Warrior Prince, The Wise Prince, and all Princess Tropes. The next step up is The Emperor. See also Benevolent Mage Ruler if the Good King is also a spellcaster.