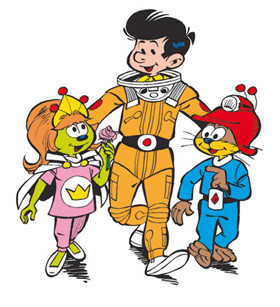 The Scrameustache is a Belgian comic book by author Gos and his son Walt, published by Dupuis and later, by Glenat. It relates the adventures of the titular character, a highly intelligent, genetically engineered animal with the features of both a cat and a monkey. He is often accompanied by Khena, a teenager human alien abandoned on Earth after his parent's ship was sabotaged, and uncle Georges, the archaeologist who adopted Khena.

Other recurring characters include the Galaxians, green aliens about the same size of Scrameustache and living on one of the moons of Khena's home planet, Aktarka, the Ramouchas, mischievous bear like creatures with electric powers, who subvert pretty much all the time the Bears Are Bad News trope, the Kromoks, a (very) Lighter and Softer version of the Klingons, and the Stixes, a race of scheming aliens.

Has a 3D animated TV series adaptation in the works, although it seems to be suffering from Schedule Slip as it was supposed to begin airing in 2016. The trailer can be found here

The Scrameustache provides examples of: