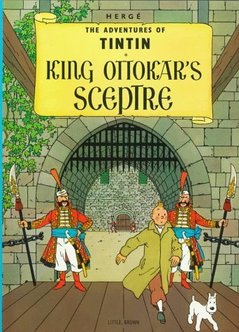 Happening upon a briefcase lost in the park, Tintin returns it to its owner Professor Hector Alembick, an expert in sigillography (the study of seals - the ones on letters rather than the ones with flippers). Professor Alembick is travelling to the Balkan kingdom of Syldavia and offers Tintin a job as his assistant. Tintin declines but later finds himself under surveillance by sinister individuals who seem connected with that country. After more than one attempt on his life Tintin decides to accept Alembick's offer and accompany him to Syldavia and get to the bottom of things.

Tintin soon finds himself thrust into the middle of a ruthless conspiracy to overthrow King Muskar XII of Syldavia in the interests of their fascist neighbor Borduria. Faced with traitors at every turn, Tintin has to race against time to save the King's throne. If the stolen King Ottokar's Sceptre is not returned by St. Vladimir's Day, the King will have to abdicate and the Bordurians will invade...

King Ottokar's Sceptre was written in 1938 and 1939, in the light of the threat of fascism; the Bordurian plot has parallels with the Anschluss (annexation of Austria by Nazi Germany) and Syldavia's location is reminiscent of Albania (invaded by Fascist Italy in 1939 a few months before the outbreak of World War II). Both Syldavia and Borduria would play important roles in later adventures. The story also introduced the recurring characters of Bianca Castafiore and the villainous Colonel Boris Jorgen.