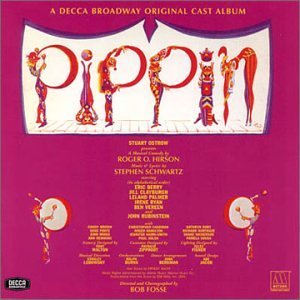 The recording of the 1972 production.
Advertisement:

Pippin is a musical written by Stephen Schwartz and Roger O. Hirson and directed by Bob Fosse. It tells the story of the young son of Charlemagne desperately looking for a place to belong.

The show is a Play Within a Play performed by a friendly (but slightly creepy) group of players led by the mysterious Leading Player. The players tell the audience that their show is building up to a fantastic Grand Finale, but don't give any information about what the Finale actually is. The Leading Player introduces us to the actor playing Pippin, who is apparently a new member of the troupe, playing Pippin for the first time. Pippin is very desperately searching for a purpose in life, and wants to find something completely fulfilling. Over the course of the show, Pippin experiments with war, sex, revolution, art, religion, and love, screwing up at everything or finding it unfulfilling. As the show goes on, the audience (hopefully) starts to question the motives of the Players, who become steadily more bizarre and scary.

But just when Pippin is feeling most desperate, he meets a young widow named Catherine, and her son, Theo. Catherine is one of the Players, but she seems different from the rest of them, and actually cares a great deal about Pippin. This frustrates and confuses the Leading Player. This isn't how Catherine's part is supposed to go. Pippin starts to work on Catherine's very ordinary estate and becomes a part of her and her son's very ordinary lives. Eventually, he and Catherine fall in love, and it seems like they could actually live together happily. But Pippin, with some provocation from the Leading Player, decides that simply living with and loving someone isn't glamourous enough for him, and he runs away from the two.

When he's failed at everything, the players reappear, saying that the only truly satisfying thing in the world is their Grand Finale—all for the audience's entertainment, of course. But right when it looks like Pippin is about to do it, he realizes that nothing in the world is truly perfect—and joins Catherine when she and Theo reappear. The Leading Player throws a temper tantrum and tells the Players to take down all the sets, costumes, lights, and makeup on Pippin and Catherine, but nothing deters them. Finally, the Players leave after saying that if any of the audience members should wish to perform their perfect act, they'll always be waiting. Pippin finds himself on an empty stage, prepared to live out the rest of his life in the most ordinary way of all, feeling "trapped, but happy." In plays following the lead of the revival, Pippin and Catherine then leave the stage, but Theo lingers, admiring the discarded set. He then begins a reprise of "Corner of the Sky", which causes the Players to reappear and join him. Well, they said they wouldn't be far away, after all.