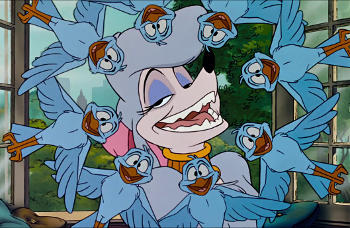 This could never be you.note If you were a dog, how would you be reading this?
"I've never lost in battle or game;
I'm simply the best by far
When swords are crossed, 'tis always the same —
one blow and au revoir!"
— Lancelot, "C'est Moi," Camelot

The I Am Great Song is sung by someone who can't sing an "I Want" Song, because there's nothing left for them to want. Their accomplishments, popularity, and undisputed mastery of their field leave absolutely no need for daily affirmations—but they have them anyway, in musical form. Singing one of these songs feels better than it probably should.

Since protagonists have to face conflict, and people love to watch the mighty fall, the hero almost never sings this song. However, it is not always a Villain Song, and the singer can be legitimately great—if songs were Greek heroes, this one would be Achilles.

Can be used as a negative-space version of This Loser Is You.

Subtrope, naturally, of the 'I Am' Song. Works best sung by a Large Ham. May overlap with Job Song if they're bragging about their job.

See also Bragging Theme Tune, Boastful Rap. Can overlap with The Diss Track if they're praising themselves but trashing someone else, and with "Gaining Confidence" Song if they only realize they're great partway through.

open/close all folders
Anime
The Disastrous Life of Saiki K.: In episode 18 of the anime, the class goes to a karaoke club. When Kokomi Teruhashi gets her turn, she smugly laments on the cliché that people assume that someone as beautiful as her can't sing-

"But sorry,
I'm super-duper good at singing,
Cause I am the perfect pretty girl you know,
I'm awesome at everything,
Don't bother trying to resist me,
I am such a cute and kind and pretty girl,
But soon enough
You're gonna say it to me,
Oh! You'll say it to me!"

The Best Band in the Universe

"The Best Band in the Universe", which is a heavy metal singer from outer space singing about how awesome he and his bandmates are, traveling ten thousand light years to bring you "the sickest riffs you've ever fucking seen".

The Best Band in the Universe

"The Best Band in the Universe", which is a heavy metal singer from outer space singing about how awesome he and his bandmates are, traveling ten thousand light years to bring you "the sickest riffs you've ever fucking seen".