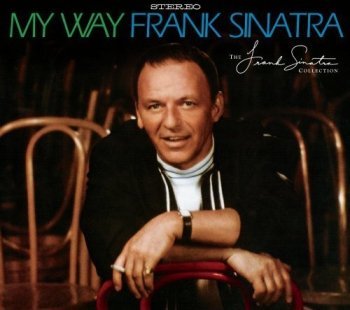 "The record shows I took the blows / And did it my way."
Advertisement:

My Way is the forty-ninth studio album by Frank Sinatra, released in 1969. The record was notable because, for the first time ever, Sinatra covered Rock & Roll songs, a genre Sinatra had previously dismissed in a 1957 Los Angeles Mirror News article with the words:

"My only deep sorrow is the unrelenting insistence of recording and motion picture companies upon purveying the most brutal, ugly, degenerate, vicious form of expression it has been my displeasure to hear— Naturally I refer to the bulk of rock ’n’ roll. It fosters almost totally negative and destructive reactions in young people. It smells phony and false. It is sung, played and written for the most part by cretinous goons and by means of its almost imbecilic reiterations and sly, lewd—in plain fact, dirty—lyrics, and as I said before, it manages to be the martial music of every side-burned delinquent on the face of the earth … this rancid-smelling aphrodisiac I deplore. But, in spite of it, the contribution of American music to the world could be said to have one of the healthiest effects of all our contributions."
Advertisement:

By 1960 Sinatra seemed to have eased up enough about rock to sing a duet with Elvis Presley and nine years later "My Way" featured covers of "Yesterday" by The Beatles and "Mrs. Robinson" by Simon & Garfunkel. He also covered "Something" from Abbey Road on a single, despite mistakenly attributing it to John Lennon and Paul McCartney instead of George Harrison during concerts. Other notable covers on "My Way" were Ray Charles' "Hallelujah, I Love Her So", Jacques Brel's "Ne Me Quitte Pas" (covered as "If You Go Away") and, of course, the Title Track, a cover of Claude François' "Comme d' Habitude", which has since then become Sinatra's Signature Song and Covered Up in too many versions of its own to list note  the most notable being by Elvis Presley and Sid Vicious on his album Sid Sings (1979) and, of all people, Perfect Cell. It got to the point that even Sinatra began to dislike the song.