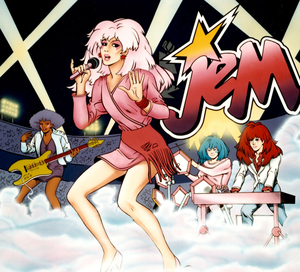 Jem was a 1980s 65-Episode Cartoon (eventually) about the adventures of a rock star, Jem, and her band, the Holograms. Jem (not to be confused with the real pop star of the same name), the pink-haired, outrageous but kind-hearted rock star, is in reality Jerrica Benton, a young career woman. Jerrica is in charge of Starlight Music, a music label; the Starlight Foundation, a charitable organization; and Starlight House, a home for orphaned and foster girls that the foundation provides funding for, all founded by her deceased parents.

Jerrica learns that shortly before her father's death, he created a computer system called "Synergy", which has the power to create Holograms and other illusions. Jerrica uses Synergy and a pair of hologram projecting earrings to turn into Jem. The only other people who know Jerrica and Jem are the same person are the members of her band, the Holograms, which consists of her younger sister, Kimber (keyboards), and their two adopted sisters Aja (lead guitar) and Shana (originally drums, then bass guitar). Later, the band gains a new member, Raya, who takes over for Shana on drums.

Most of the trouble the group faces comes in the form of Eric Raymond, a power-hungry Corrupt Corporate Executive who was Mr. Benton's former partner in the record company. His "discovery", a band called the Misfits (not to be confused with the real band) consisting of Pizzazz (guitar/vocals), Roxy (bass) and Stormer (keytar), is a group of self-described "bad girls from the wrong side of the tracks," who are constantly causing trouble to get attention and/or trying to ruin Jem. Reacting to the publicity that the Holograms get from adding Raya, they also pick up a new member, Jetta (saxophone). (Ironically, the Misfits were better received by Real Life critics than the Holograms.)

The third season switches things up by adding a new rival band, The Stingers. This band consists of charismatic Riot (vocals), conniving Rapture (bass), and the seductive Minx (synthesizer). Riot is the only male lead singer, and his interest in Jem (and only Jem) leads to even more drama for the Holograms, as does Minx's insistence on chasing Rio. Pizzazz of the Misfits is interested in him too, but his lack of reciprocating deepens their rivalry with the Holograms as well.

Originally, the series was created for a line of dolls made by Hasbro. The series combined music, adventure, fashion, and Soap Opera-esque drama which gave the show its own appeal. The show originally premiered as a serial of minisodes roughly ten minutes in length that told the origin of the show and ran during a block of other short shows with a male-oriented audience. The ratings were high enough that the show was picked up as a full half-hour series in its own right and the original serial was reworked into a four-part pilot. Though the doll line was pretty much shut out by the competing Barbie toyline, the series was popular enough that it was allowed to finish its 65 episode run even after the toyline was cancelled. The cartoon frequently reran in syndication, most notably on the USA Cartoon Express throughout the early 90s. The Hub had started to play episodes of this series as of May 28, 2011, though Discovery Family removed it from their schedule in late 2015 (after the Live-Action Adaptation bombed). The show has been released twice on DVD in the US (once by Rhino, who didn't finish, and later a complete series by Shout Factory). 2011 also had Hasbro integrate Jem into a comic called Unit:E, which had Synergy, now an alien AI, assisting characters from Micronauts into helping gather heroes from around the multiverse; according to Synergy, Jerrica/Jem would help compose the "music of the spheres".

A Live-Action Adaptation movie was released in October of 2015, updating the show's concept to fit into a modern day setting and reimagining it as a Coming-of-Age Story. It flopped. Badly.

IDW Comics has begun an ongoing Jem series in 2015, written by Kelly Thompson with art from Sophie Campbell and other artists.

Compare Kidd Video, another show centered on 80s music; Dazzler, an X-Men mainstay, another Idol Singer with light-based powers; Hannah Montana, another show based on a pop star with a secret identitynote Although this show only uses it as a source of comedy.; and Christina Aguilera, who would come along many years after the show and looks eerily like Jem. Not to be confused with Welsh singer Jem.

The Misfits sing about how they're mean, like popularity, and are proud of it.

The Misfits sing about how they're mean, like popularity, and are proud of it.