Going to the Store 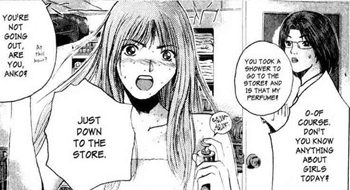 Jackie: Um, you know, I just remembered that I have to go to the mall because they're having this big Monday Madness sale.
Donna: Jackie, it's Tuesday.
— That '70s Show

A subtrope of Room Shuffle.

A stock excuse for going out, when a character either doesn't want to give the true reason or is leaving not to return, is "I'm going to the store". In Manga, Anime, and other Japanese media, the store in question is likely to be referred to as the konbini; i.e., the local convenience store open at practically all hours.

One reason this trope is a lot more prevalent in Japanese media is that they don't have a lot of space in their homes for storage, and convenience stores sell more kinds of things, so it happens more in Japan.

In the U.S., though, going to get cigarettes or milk or "the paper" is often a convenient excuse to get a character away from the others for a while, and as there are convenience stores that are open 24 hours a day, too, it's not a major expedition, so one character may go alone.

See also I Need to Go Iron My Dog and Parent Never Came Back from the Store.