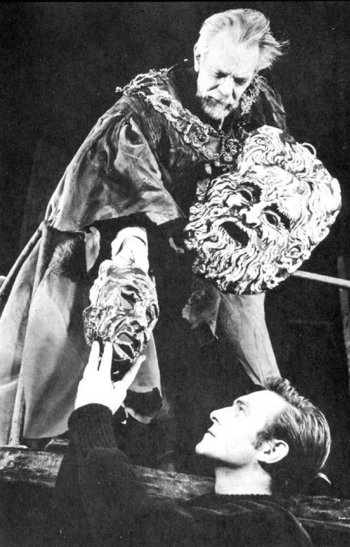 Raymond Massey and Christopher Plummer as Zuss and Nickles from the original Broadway production.
"I heard upon his dry dung heap
That man cry out who cannot sleep:
'If God is God, He is not good,
If God is good He is not God;
Take the even, take the odd,
I would not sleep here if I could
Except for the little green leaves in the wood
And the wind on the water.'"
— Nickles
Advertisement:

It is an Americanized, metatheatrical retelling of the Book of Job. Two circus vendors, Mr. Zuss and Nickles, are left in an empty tent after a show. They find a couple of drama masks, and decide to put on a show, namely, the story of Job.

Actors then appear out of nowhere. J.B., sometimes also called Job, is a wealthy banker, married to Sarah. They are parents to five children. Nickles, who is playing the part of Satan, challenges Zuss, playing the part of God. Nickles claims that J.B. only worships God because he imagines God to be the source of his earthly prosperity and happiness. Zuss, as God, proceeds to put J.B. to the test by utterly destroying his life, killing all his children and leaving him homeless.

The original 1958 Broadway production (which used a somewhat altered script) was directed by Elia Kazan and featured Christopher Plummer as Nickles, Raymond Massey as Zuss, and Pat Hingle as J.B.