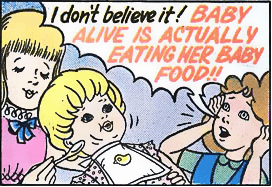 Toys for girls which are marketed as using magic rather than technology. These ads are aired in countries with truth-in-advertising laws. Therefore, these toys must use actual magic!

Okay, seriously, computers and electronics and alkaline batteries allow toys to do amazing things. Toy companies are well aware of this. But how they handle it depends on whether the toy is meant for boys or girls.

Not every advertising campaign uses the trope. For example, the 1980s Jem toy line which had Synergy, a hologram-making super-computer. Another was the 2000s line of GirlTech products, which made up for their open high-techness by being very, very pink.

This is by no means a hard and fast rule, however. In fact, the pure and simple reason for this trope seems to be that most toys for girls are supposed to mimic something living. It's just that most boys' toys have historically been based on machinery to start with, and—barring certain noteworthy exceptions—there's no need to convince boys that their new RC car or toy blaster gun is a sentient creature. When a product aimed at boys does imitate something living, it's also treated as "alive." For example, Mattel's "D-rex" is an interactive robotic dinosaur, aimed mostly at boys, whose advertisements made it out to be a living creature.