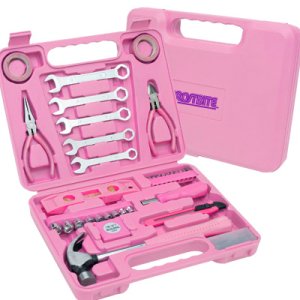 Shrink it and pink it.
"That's right — pink guns. If you're a woman who's put off by the macho violence of guns, maybe you'd change your mind if they were pink."
— Cracked, "The 5 Most Pointlessly Women-Specific Products"

Simply put, coloring a product pink on the assumption that doing so will make women more likely to buy it.

Products made for women, especially girls, are often pink. Whether it's toys, clothes, school supplies, phones, backpacks, etc., if it is meant for girls or women, it will likely be pink. Traditionally, men never buy them. This is common in Real Life, but probably started in works. This is also to get women to buy products traditionally used only by men.

For stuff in works, this accounts mainly for The Merch, but can cover things In-Universe (especially when lampshading or discussing this).

Many people these days find this almost insulting, as if the color of the product is the sole turn off from women buying it, implying they can be that shallow. And it doesn't work in all cases. There are, however, some people who do buy pink products because they are pink (if you like pink, and pink is an option, then why not get the pink one), and some individuals and organizations have attempted to make the pink-female association an Appropriated Appellation. Be proud to be a woman — use the pink folding multitool with rhinestones! (Yes, that product existed.) Some women with hobbies involving hand tools (such as jewelry making) and men in the house can also find that pink, floral, or other "girly" appearance can help discourage tool theft by men.

It has also been observed that products targeting women are often slightly more expensive than similar products targeting men, usually due either to production changes required to make the products appeal to females, or the belief that women are more willing to pay more for certain categories of products than men. Unsurprisingly, this phenomenon has been dubbed the "pink tax".

A Sub-Trope of Pink Means Feminine and Men Are Generic, Women Are Special.

Compare Clarke's Law for Girls' Toys. See also Girly Bruiser, Tomboy with a Girly Streak, and Magical Girl Warrior for in-universe characters who might proudly wield a hot pink warhammer, Wrench Wench for a character who might Squee over the page image, and Real Men Wear Pink for a guy who might do the same.

open/close all folders
As An Advertising Trope
In-Universe Use