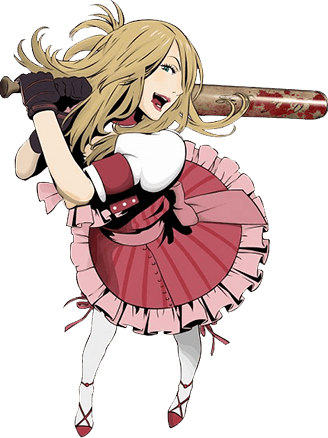 Her frilly dress coordinates so well with the blood she splatters.
Rocket candy, all the colors, planet happy
She woke up to change the world
Wears her make-up, shiny shoes, and secret sprocket
You're my hero with the
Lightning flower superpower!
— Leslie Mills, "Rocket Candy"
Advertisement:

The majority of Action Girls out there are all quite physically attractive and feminine in their own right, but there tends to be an arbitrary line drawn between exactly how feminine an Action Girl can be.

She will be tough as leather and as soft as silk. If there is a Tomboy and Girly Girl situation, then she will be the Girly Girl but will not be any less of a badass. Traits of the Girly Bruiser can include having a love of fashion and make-up, having stereotypically "girly" hobbies, loving cute animals, and loving the color pink (or other colors with similar connotations of femininity), in addition to doing and liking those activities as much as she does and likes kicking ass. She may even do her ass-kicking while wearing frilly girls' clothes, though it's not necessary. However, she's not necessarily lacking in tomboyish qualities.

Personality traits associated with this character include The Ditz, Genki Girl, The Pollyanna. Can often be a Pretty Princess Powerhouse and/or Badass Adorable as well. More often than not, the Tomboy will usually be a Blood Knight, and the Girly Girl will usually be a Martial Pacifist, the latter of whom will try To Win Without Fighting before resorting to violence. The Girly Bruiser differs from the Lady of War in that she doesn't have to be elegant with her ass-kicking (although she can be).

The classic Magical Girl intersects with this trope somewhere: she's at her most powerful when she's wearing as many pretty Frills of Justice and Frilly Upgrades as possible.

Sub-Trope of Cute Bruiser. Super-Trope to Super-Cute Superpowers. A Sister Trope to Lady of War (the elegant counterpart), Kicking Ass in All Her Finery (the fashionable counterpart), Nothing Nice About Sugar and Spice (the dark/villainous version), and Agent Peacock (the Spear Counterpart). Contrast Real Women Don't Wear Dresses.