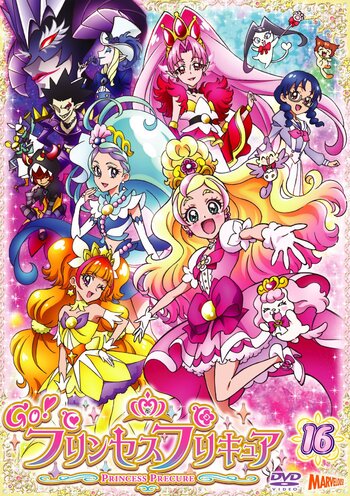 Go! Princess PreCure is the twelfth entry in the Pretty Cure franchise. It is the tenth separate continuity in the series, and began airing in February 2015.

Haruka Haruno is a girl who dreams of being a princess just like in the picture books she loves to read. As a child, this dream got her bullied by her classmates. One day, while running from her bullies, she encountered a strange boy named Kanata. He cheered Haruka up, and told her to hold onto her dream. Before disappearing he gives her a little trinket known as a Dress-Up Key. Years later, Haruka enters the prestigious Noble Academy, a boarding school for middle school students. While exploring the campus, she encounters a pair of fairy siblings: Puff and Aroma. Claiming to be from the Hope Kingdom, they are on a quest to find the Princess Pretty Cure.

Unfortunately, the fairies themselves are found by a member of the Dysdark. These villains have the power to lock up people's dreams in order to create monsters known as Zetsuborgs. When her roommate is attacked, Haruka awakens the power of her Dress-Up Key and the Princess Perfume carried by the fairies. The items allow Haruka to become the legendary Princess, Cure Flora. She uses her newfound powers to defeat the Zetsuborg and rescue her friend.

Afterward, the fairies explain that they came from the Hope Kingdom when it was attacked by the Dysdark and its leader, the witch Dyspear. Haruka is surprised to find that the prince of the Hope Kingdom is none other than Kanata. Haruka decides to fight against the Dysdark and find the other Princess Pretty Cure...who just so happen to be at her school. The first is Noble Academy's Student Council President Minami Kaido. An elegant and popular girl who finds her Dress-Up Key on the beach, she becomes Cure Mermaid. The second is fashion icon Kirara Amanogawa, who finds both the Dress-Up Key and Perfume in her dressing room. Initially reluctant to be a magical girl, she eventually joins the others as Cure Twinkle. Once the team is finally brought together, Kanata contacts the Precure and asks them to find the nine remaining Dress Up Keys which can save the Hope Kingdom.

Midway through the series, the Cures are joined by Towa Akagi, a Hope Kingdom native who becomes Cure Scarlet.

Not to be confused with the Chinese drama Go Princess Go.

Have a good day!
Feedback

Haruka's training regimen for tennis is depicted through a montage.

Haruka's training regimen for tennis is depicted through a montage.