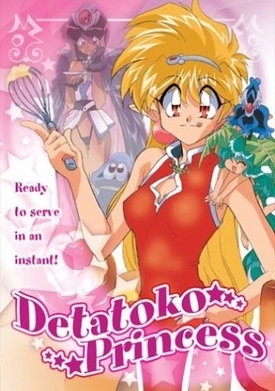 Detatoko Princess is a comedy manga and anime that parodies the High Fantasy and Magical Girl Warrior genres. The manga was released in six volumes, while the anime was a 3-episode OVA.

After destroying the Floating Gardens to save a baby bird, ditzy Princess Lapis of Sorcerland is banished and must undergo a long journey back home to the Diamond Palace. With her for the adventure are a young fairy, a directionally-challenged immortal, and her math tutor.

Armed with the powerful magic eraser, and an unmatched love of pudding, Lapis continues forth righting the injustices of the world and defeating magical foes—even if it means she destroys the kingdom in the process.