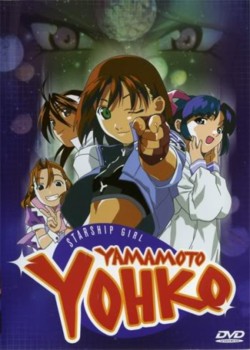 "It's time you learned who you picked a fight with!"
—Yamamoto Yohko
Advertisement:

Based on novels by Shoji Takashi, Starship Girl Yamamoto Yohko is a sci-fi anime series featuring female characters. Set in the future, wars are fought differently, unlike how war originally was, which is people killing people for territory. These kinds of wars are competitive wars in which no one dies. The main protagonist of the series is Yohko Yamamoto, a girl from the 20th century who is what you call a Gamer Chick.

The show lasted on two OVA's and a 26 episode TV series which has never seen an English release of any form in North America, and the light novels were rereleased as of 2010.