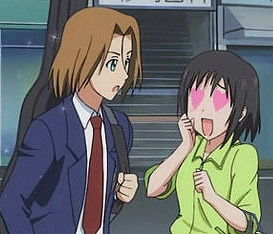 Kyoko-kun, this isn't the time to
make hearts with your eyes!
"I don't want someone brave and gentle and strong. I want Joffrey!"
— Sansa Stark, A Song of Ice and Fire
Advertisement:

She's a wholly average girl, with a crazy strong crush on a guy or girl that makes little to no sense.

Sure, he may be hot, and you could understand a woman finding him attractive. However, the intensity is just too much to make sense.

What Does She See in Him? is commonplace.

This doesn't mean the girl's feelings aren't genuine. After all, she is likely to be both fairly young and extremely naïve. Also, this doesn't necessarily rule out the possibility that her initially shallow, child-like crush may develop into more sincere and deeper feelings, or start to fade away as she falls for someone else or develops other interests/priorities/etc. Also, it's rather common to see that the girl does have reasons beyond "he's cute" or "he's cool" (he may have done something really nice for her, for example), but we just didn't know about their common history, and we're told about them only later in the story.

At her best, she will be just a Girl Next Door who tends to go starry-eyed at the guy. At her worst, she may be a Stalker with a Crush and/or a Clingy Jealous Girl. Don't be surprised if the Smitten Teenage Girl gets over her crush and falls for the guy that was "always there for her". If she does get over her crush, expect him to be Put on a Bus.

Some Yanderes are or start as Smitten Teenage Girls. Compare/Contrast Precocious Crush.

And what exact sort of 'corn' are you talking about, Clover?

And what exact sort of 'corn' are you talking about, Clover?