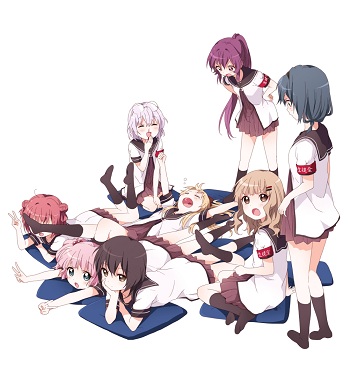 Taking advantage of the disbanded Tea Ceremony Club's abandoned building, Kyouko Toshinou forms the Amusement Club, roping in her childhood friend Yui Funami. When the severely Out of Focus Akari Akaza and Cute and Psycho Chinatsu Yoshikawa start their first year and join the club, a Four-Girl Ensemble is born. With the lazy, free-for-all antics of the unofficial club happening behind-the-scenes, student council vice-president Ayano Sugiura and her best friend Chitose Ikeda become involved, naturally pulling their juniors Himawari Furutani and Sakurako Ohmuro with them headlong into the Amusement Club's silliness.

YuruYuri (aka Happy Go Lily aka Lazy Lily) is an ongoing 2008 Slice of Life comedy manga written by Namori that originally ran in Ichijinsha's yuri anthology Yuri Hime S. Two anime adaptation seasons aired as part of Summer 2011 and Summer 2012 lineups.Production Both seasons were produced by Dogakobo Studios under the direction of Masahiko Ohta. Building up for the upcoming third season, YuruYuri San☆Hai!note Let's Go! or Yes, Three! airing in Fall 2015, a medium-length movie special, YuruYuri Nachuyachumi!note A cute way of saying Summer Break, i.e. "Summer Vacachuun", was released Direct to Video in Japan in February 2015 and focused on the girls going on a summer camping trip. Two episode-length follow-up specials, YuruYuri Nachuyachumi!+, aired later in the summer.Production Both Nachuyachumi! and San☆Hai! were produced by Pony Canyon and TYO Animations and directed by Hiroyuki Hata.

The manga has so far created four spin-offs: YuriYuri, a one-shot anthology focused on much more serious lesbian romance; Risetto!!, set in the same school but focusing on a pair of freshmen trying to make a doujin game; Ohmuro-ke, a series of web comics released after each episode of Season 2, which focus on the lives of the eponymous Ohmuro sisters; and Touzainanboku!, a prequel focusing on Nanamori Middle School's four teachers in their high school days.

In celebration of the manga's 10th anniversary, the anime got an extra OAD.

The first two seasons have been licensed by NIS America as Yuruyuri: Happy Go Lily and can be legally watched

on Crunchyroll and Hulu.