Manga / WATATEN!: an Angel Flew Down to Me 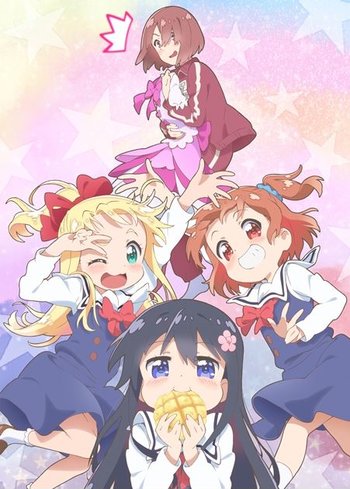 "At the end of May, just when it felt like spring was beginning to wane...an angel flew down to me!"
Advertisement:

Miyako Hoshino is a college student whose extreme shyness has turned her into a shut-in. Her life changes forever when her fifth-grader sister Hinata takes her best friend Hana Shirosaki to visit and Miyako is suddenly hit with a funny, squirmy feeling in her chest that she's never felt before. Although Hana is initially off-put by Miyako's affection, the sweets that Miyako makes are enough to keep her coming back and wearing the cosplay outfits that Miyako hand-makes, and the two find themselves growing closer.

WATATEN!: an Angel Flew Down to Me (Watashi ni Tenshi ga Maiorita!) started off as a four-panel yuri manga written by Nanatsu Mukunoki, which began serialization in Comic Yuri Hime in 2016. It received an anime adaptation by Doga Kobo in January 2019. Crunchyroll is streaming the anime, which can be viewed here

Example of:
No Social Skills

Alternative Title(s): Wataten An Angel Flew Down To Me