Manga / Wave, Listen to Me! 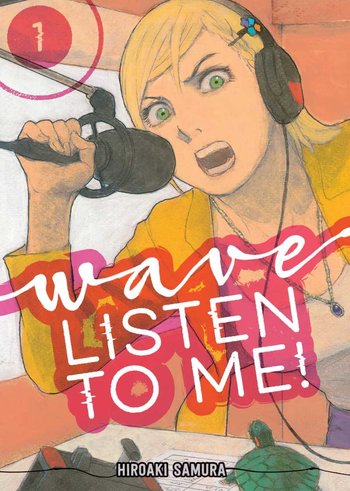 The stage is Sapporo, Hokkaido. One night, Minare Koda, fresh out of a breakup, drunkenly spills her woes to a random stranger while out drinking. The next day, she hears her ramble played on the radio for everyone to hear. Furious, she storms into the radio station, only to be duped into doing an impromptu talk show live on air by the station director, who turns out to be the random stranger she met last night. Thus, Minare enters the world of radio.

Wave, Listen to Me! (Nami yo Kiite Kure) is a manga by Hiroaki Samura, which began serialization in Monthly Afternoon in 2014. It received an anime adaptation by Sunrise in April 2020. Kodansha Comics is releasing the manga in English.

Funimation streamed the series in Japanese (with subtitles) and has done the English voice track. In Japan, it's available via Netflix and Hulu online and it aired on various terrestrial TV stations.

This manga series provides the examples of: