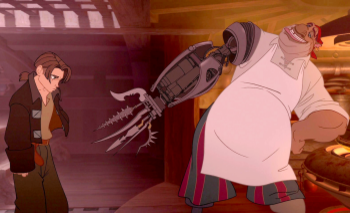 You should see the rest of them.
Advertisement:

Often a character who is missing a limb will make the best of it by having a whole collection of artificial replacements, that get hot-swapped as the occasion warrants. At least as it applies to heroes, this is predominantly a literary trope, as viewers tend to find obviously artificial limbs unattractive. It's frequently associated with heroes who are older and/or more intelligent than average—they have to be older because they need to have had time to get injured, and coming up with the idea often seems to connote intelligence (or at least mechanical aptitude).

Frequently, the limb uses Telescoping Robot technology to generate the tool from Hammerspace.

When the replacement limbs are collectively more capable than an ordinary one would be, this becomes a kind of Disability Superpower, although the odds of suffering a Fake Arm Disarm increase. These can also include Hook Hand, Arm Cannon, Blade Below the Shoulder, Swiss-Army Weapon, Spider Limbs, etc.