Manga / UzaMaid: Our Maid Is Way Too Annoying! 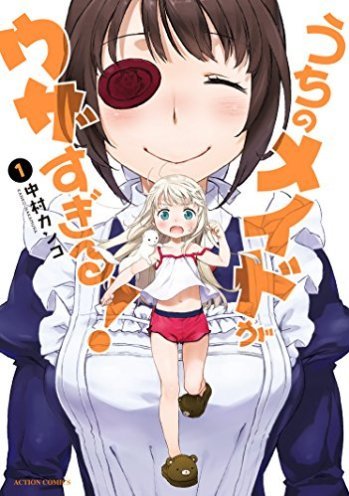 After losing her mother to illness, Russian grade-schooler Misha has become a total recluse, locking herself away in her room to play video games all day while cruelly driving away each and every maid her Japanese stepfather hires to keep house. Desperate for somebody who can deal with her outbursts, he posts yet another ad for a new housekeeper.

It's answered by Tsubame Kamoi, a muscular, implacable ex-JSDF fighter pilot and unrepentant lolicon who only has eyes for Misha.

To Misha's chagrin, Tsubame effortlessly shrugs off every attempt to drive her away. Now a mainstay at Misha's house, Tsubame becomes obsessed with ingratiating herself to her young ward, whether it's making her frilly clothes and trying to get her to play dress-up, pretending to be another little girl so she can win Misha's trust in an MMO, or ending every conversation by pulling out some marriage papers. Disgusted and creeped out by the ex-military maid's lecherous advances, Misha will need to keep all her wits about if she wants to keep her dignity intact. There's nowhere to run and nowhere to hide when Tsubame comes to clean house.

Uchi no Maid ga Uzasugiru! (うちのメイドがウザすぎる! / "Our Maid is Way Too Annoying!") is a Black Comedy Slice of Life manga written and illustrated by Kanko Nakamura. It began serialization in a defunct yuri magazine named Hikari in 2016 before switching over to the seinen Monthly Action.

Doga Kobo released an anime directed by Masahiko Ohta during the Fall 2018 season. Crunchyroll has licensed the show, which can be viewed here