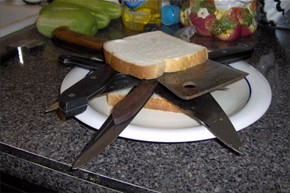 Shut up and eat your MANwich.
"It has a funny taste. You can't put your finger on it, but if you had to describe it you would say it has the flavor of INTENSE PAIN."
— Problem Sleuth
Advertisement:

The masochist's meal is any food that is so unpleasant, painful, disgusting, or even outright dangerous to eat that the only reason any sane man would eat it is to be able to brag that he did...which possibly puts his sanity in doubt. Real-Life examples abound, to the point that fictional analogues tend to be really over-the-top.

It will often be prepared by a Cordon Bleugh Chef or a Lethal Chef. Can overlap with Stock "Yuck!", Foreign Queasine, Eat That, and Bizarre Taste in Food. It's common that a character Prefers Raw Meat or is a Metal Muncher for this reason. For bad tasting coffee, see Bad to the Last Drop, or A Tankard of Moose Urine for nasty alcohol. For drinks that are way too strong instead of bad tasting, see Klatchian Coffee and Gargle Blaster. See also Fire-Breathing Diner, Blazing Inferno Hellfire Sauce, Unaffected by Spice, and Hot Sauce Drinking for more stuff on the spicy side. If the food is gross because it is unhealthy rather than bad tasting it may fall under Nutritional Nightmare. If the food horrifying because it is sadistic instead of masochistic, or otherwise makes you feel guilty about eating it, it is an Exotic Entree. A person trying dodgy foods may respond with It Tastes Like Feet or I Ate WHAT?!.

The hot foods we're most familiar with are mostly from three groups — the Brassicas (cabbage, turnips, radishes and relatives), the Capsicums (chile peppers, related to tomatoes, potatoes, and nightshade in the Solanaceae family), and the Piperaceae (black pepper and a couple of exotic relatives like long pepper and cubeb). (There's also spices like cinnamon and ginger, but except for things like cinnamon candy, they're better known for their overall flavor than just the heat.)

Cheese and Other Dairy

Feeding large armies in the field has led to some rather creative and unique solutions over the centuries:

Giorno uses Gold Experience to turn his tooth into a jellyfish sponge before drinking up Abbacchio's piss tea.

Giorno uses Gold Experience to turn his tooth into a jellyfish sponge before drinking up Abbacchio's piss tea.