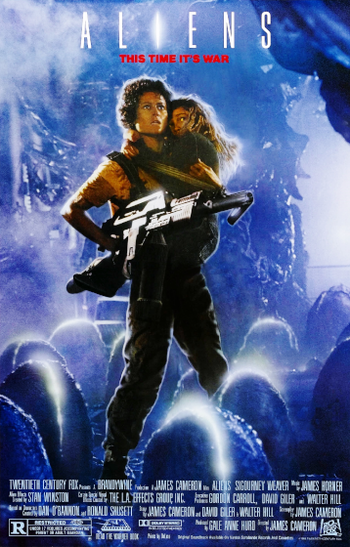 This time, it's war.
Ripley: Just tell me one thing, Burke. You're going out there to destroy them, right? Not to study. Not to bring back. But to wipe them out.
Burke: That's the plan. You have my word on it.
Ripley: All right, I'm in.
Advertisement:

Aliens (1986) is the second film in the Alien film series, starring Sigourney Weaver. It was directed by James Cameron, and shifted the theme from horror to action, something Cameron would later apply to the sequel to one of his earlier films.

Ripley wakes up from hypersleep half a century after the destruction of the Nostromo. Her former employers, the Weyland-Yutani company, disbelieve her claims about the alien and revoke all of her licenses. The company starts taking her seriously, however, when it loses contact with a colony it established on the world where the Nostromo crew encountered the alien. The company sends a unit of Space Marines to investigate, and Ripley, although reluctant to go back, accompanies the unit as a scientific advisor.

When the unit arrives, they find the colony in ruins. The only survivor of what appears to be another alien attack is a little girl who goes by the name Newt. The Marines explore further into the colony… and discover an entire nest of aliens.

Aliens is widely regarded as one of the greatest sci-fi, horror, and action movies of all time. It's chock full of awesome moments and iconic scenes, and it gave birth to a fair number of the tropes which have since influenced modern media to a near-absurd degree — and it did all this without the aid of digital editing. It's also one of the few film sequels to be regarded as on par with the original, if not better. It also permanently redefined what female characters could do in science fiction/fantasy.

In 2015, director Neill Blomkamp announced plans for a new Alien film to directly follow this film's events, with Sigourney Weaver and Michael Biehn attached to return as Ripley and Hicks. However, Fox scrapped the film in favor of doing Alien: Covenant instead.

Newt: Are we gonna sleep all the way home?
Ripley: All the way home.
Newt: Can I dream?
Ripley: Yes, honey. I think we both can.
[tucks Newt in]
Ripley: Sleep tight.
Newt: Aye-ffirmative.
Feedback

"Get away from her, you bitch!

"Get away from her, you bitch!