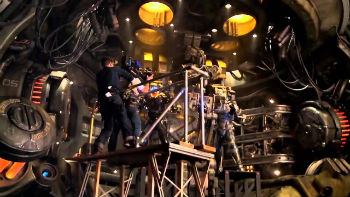 Build your own today!
Advertisement:

Practical effects are those which are done using props or special gear to produce an effect for the camera to film. Wind- and rain-machines, squibs, radio-controlled vehicles, Muppets, and pyrotechnics are all practical effects. So are breakaway furniture, walls or windows, and tilting or shaking platforms under the set.

They are probably the most common type of effect and often seen as giving the most realism. The truth of the matter is that they give rise to a lot of Hollywood Science but we are so used to seeing them that The Coconut Effect plays across nearly everything we see and we get used to them. Really all those car explosions, spurting veins and gun shots would behave very differently in reality. It's a shame reality is so unrealistic.

Rightly or wrongly, though, practical effects are seen by many as being in some way superior to Computer-Generated Images or CGI. Certainly, early CGI was much more prone to Special Effects Failure, the lower resolution, texturing and lighting flaws would push the images into the Uncanny Valley while even a bad practical effect could be seen to be physically real. The more modern CGI can still be very conspicuous compared to a well-integrated practical effect. And an argument can be made that it's easier for actors to turn in a good performance when interacting with something physical.

A number of those who are Doing It for the Art will therefore stick to practical effects and the audience will often thank them for it. They will make proud announcements during promotions that everything in their movies is real and will take extra costs and risks to ensure their "realism."