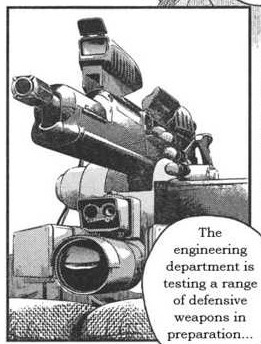 "Like this heavy-caliber tripod-mounted little old number designed by me. Built by me. And you best hope - not pointed at you."
— The Engineer, Team Fortress 2
Advertisement:

Put simply, the Sentry Gun is a fixed gun with sensors that aims and shoots by itself — you don't need to be standing next to it for it to do its work. Think of it as an Attack Drone without the propulsion system. You'd often find sentry guns in near-to-distant future settings, where automated combat is commonplace. With regards to behavior, one key difference from the Attack Drone is that a Sentry Gun usually completely autonomous. In more realistic works, this generally implies a highly competent defense that you can just leave it on its own to do its work. In less realistic works, the odds are its friend-or-foe identification won't be reliable; thanks to ridiculously poor artificial intelligence, the sentry guns are likely to shoot friendlies (and each other) by accident as much as they are likely to shoot their enemies.

In video games, they're typically weak or fragile to emphasize the need of human intervention in area security, but they do make base raiding all the more difficult for the attacking team. As such, they aren't usually capable of holding a Zerg Rush off by their lonesome, let alone a single powerful entity. It may have infinite ammo in order to give it some persistence in battle. Sentry guns that fire other ammo, such as lasers, energy balls, missiles, or weird things like fruit and so on also exist, especially in Shoot Em Ups. The Turret Master specializes in deploying these. Occasionally, they're removable.

Almost inevitably, a Sentry Gun will resemble a fixed machine gun, though they can technically be of nearly any shape. Even so, they tend to take several distinct appearances. Here are the most common forms of them:

All Tower Defense games are built around this trope — you place multiple guns of different types down to prevent the enemies from reaching you.

Real life examples exist. While the military is reluctant to give trigger-pull authority to a computer, there are many forms of remote-operated gun platforms in development and in service today, controlled by a human operator at a distance.

Bushwhacker's special ability is that he can deploy a turret.

Bushwhacker's special ability is that he can deploy a turret.