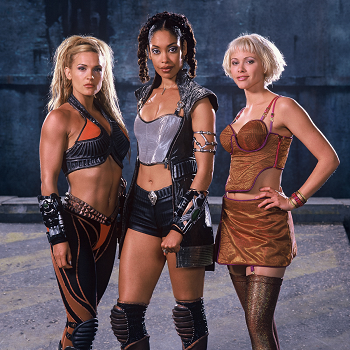 "Five hundred years into the future, she will enter a world where machines rule the Earth. Mankind has been driven underground. And Cleopatra is about to discover – there's no place like home!"

Cleopatra 2525 is a pulpy 2001 science fiction television series which ran for two seasons.

In 2525, an exotic dancer named Cleo (Jennifer Sky, right) is awoken after being cryogenically frozen after a boob job mishap in 2001. She is rescued from certain doom as a test dummy by two female vigilantes, Helen (Gina Torres, center) and Sarge (really named Rose) (Victoria Pratt, left). These two fight to return humanity to the surface, after they have been pushed down into the Underground - a series of shafts and levels created by an unknown entity - by human-killing robots called Baileys.

These robots come in a variety of forms. Some are nearly indistinguishable from humans. They are termed Betrayers, and many episodes revolve around killing one or escaping from them.

One of these Betrayers is Mauser, whose synaptic nets have been reprogrammed by Helen and Sarge. He serves as the technical guru. The final member of the team is Voice, an unknown entity that is connected to Hel via a chip in her brain. Voice is known to work with other teams, and at some point in the past was responsible for causing one team leader to gain telepathic abilities and betrayal from another. Both individuals are considered villains aside from the threat of Baileys and Betrayers.